A Question Answering system allows the user to ask questions in natural language and to obtain one or several answers. For boolean and generic questions, our system is able to generate potential questions and to return the corresponding answers.

End-user application, Question-Answering is the easiest way to find information for everybody: ask the question as you want and obtain answers, not snippets or pages.

Search and find precise answers in any collection of texts, from the Web or any other source (voice recognition, optical character recognition, etc.), with eventual correction of the source text, ability to generate questions from generic requests, eventually a single word, ability to find similar questions and their answers, etc.

The technology is a system based on very consequent linguistic resources and on NLP state-of-the-art technologies, especially, syntactic and semantic parsing, with sophisticated features like resolution of anaphora, word sense disambiguation or relations between named entities.

SDK available for integration in programs or Web services.
For specific conditions of use, contact us. 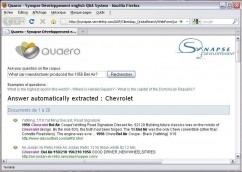